The Weekly paper of the New Communist Party of Britain 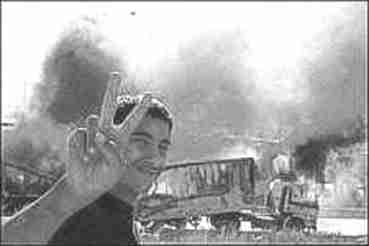 V is for victory

Welcome To Our Weekly Digest Edition

Please feel free to use this material provided the New Worker is informed and credited.

by our Arab Affairs correspondent


AMERICAN TROOPS are massing outside the Shia holy city of Najaf while thousands more are besieging the defiant city of Fallujah as the national revolt spreads like wildfire across occupied Iraq.

Western countries are urging all their nationals to get out of Iraq immediately and US President Bush has vowed to use “decisive force” to crush the Iraqi uprising. He summoned Tony Blair to the White House for a cosmetic summit designed to boost Bush’s flagging popularity at home while in the shadows US diplomats are working to try and defuse the crisis that threatens to destroy what credibility the United States and Britain still have in the Middle East and beyond.

American artillery is pounding Fallujah despite several statements by US High Command in Baghdad confirming that a “ceasefire” was in place. And crack US troops have ringed Najaf – the stronghold of rebel cleric Muqtada al Sadr, now wanted dead or alive by the US military authority in Baghdad.

Last week’s spiralling violence has shaken the Americans to the core. The battle for Fallujah and resistance attacks all round the country have led to the deaths of at least 87 US troops – many of them Marines – and nearly 600 more wounded. A further 80 odd mercenaries – hirelings of the predator transnationals and the occupation army – have also been killed.


Several US helicopter gunships have been shot down and many of armoured vehicles including tanks have been knocked out in the fighting.

The resistance claims to hold some 30 US Marines who surrendered at Fallujah and numerous foreign workers have been taken hostage by the guerrillas though those from countries that opposed the invasion like Russia and People’s China have been quickly released. Hundreds of Iraqis have also died at the hands of US imperialism.

Most of them were civilian victims of indiscriminate US fire or terror attacks by American aviation. And taking a leaf out of the Americans’ book the Fallujah resistance has put a $7,000 price on the head of Mouwafak al Rubaie, the quisling “national security adviser” who called on the people of Fallujah to hand partisans over to the United States.

In British occupied southern Iraq al Sadr’s Mehdi Army has withdrawn from Basra on terms agreed with the British military administration that leaves the hub of the mainly Shia south entirely in the hands of the local puppet police. But elsewhere his Shia militia is locked in combat against the Americans, often fighting side-by-side with Sunni militias and units of the Saddam youth fedaiyin.


Al Sadr has vowed to continue the fight to end the US occupation and says he’s ready for martyrdom. “I fear only God. I am ready to sacrifice my blood for this country. But I call on the Iraqi people not to let my killing put an end to their rejection of the occupation,” he declared.

But the junior Shia cleric has held talks with his much more cautious superiors in the Iraqi Shia hierarchy who hold seats on the puppet council. They would largely agree with al Sadr’s demand for the US to cease fire throughout the country, withdraw their troops to barracks outside the cities and release all the detainees.

General John Abizaid, the head of US Central Command in Iraq, has publicly called on the Pentagon to send 10,000 more troops to quell the uprising while bitterly complaining at the collapse of the puppet police and army in the face of the partisan onslaught.

Behind the scenes American diplomacy is working to try and put a lid on the fighting. Though Arab League offers to mediate were predictably ignored Washington has formally asked Iran, a member of Bush’s “axis of evil” hit-list, to help ease the growing violence. Iranian Foreign Minister Kamal Kharazzi confirmed this on Wednesday in Tehran. Speaking to the media after a Cabinet meeting Kharazzi said that the American appeal had come via the Swiss embassy in Tehran. “There was a request for our help in improving the situation in Iraq and solving the crisis, and we are making efforts in this regard,” he said.

An Iranian Foreign Ministry delegation has flown to Baghdad for talks with Shia religious leaders and members of the puppet “governing council”. But Kharazzi was less than optimistic about the success of the mission. “We have had negotiations in the past but they were stopped. We are of the sentiment that these negotiations are pointless because the Americans make promises but do not keep them”.


As the body-bags pile up the extent of the crisis is now apparent to the American public long duped by the lies of Bush’s “neo-conservative” advisers. The US peace movement warned from the very beginning – when Afghanistan was invaded – that Bush was dragging the States into another Vietnam. At the time this was dismissed by the war lobby as scaremongering. Now it may have been an understatement.

Get out of Iraq


THE HEROIC people of Fallujah have fought the US Marines to a standstill, forcing them to accept a cease-fire. Throughout Iraq the people are taking up the gun to drive the invaders out of their country. The flames of resistance are spreading as the masses defy the might of imperialism to demand freedom and independence.

The anti-war campaign and the labour movement as a whole must mobilise to unite the largest number of people behind the greatest possible protests against Blair and the war camp that he serves.

The Blair leadership has aligned itself with the most reactionary and aggressive elements within the British ruling class. These people, who see their imperialist interests served in slavish alliance with American imperialism, threaten to plunge the world into chaos and war with their plans for world domination.

They believed they could terrorise the Iraqis into submission. They thought their armies were invincible. Now they are learning the old lesson that oppression breeds resistance.

It can only end one way: with the defeat of Anglo-American imperialism. The question is how many will die before they realise that their neo-colonialist dreams were based on ropes of sand.

Get rid of Blair

Labour Party membership has hit an all-time low. Tens of thousands of members have deserted, according to the official Labour figures that do not take into account those who left over the Iraq crisis. Labour’s national membership at the end of 2002 stood at 248,294, well below the 405,000 plus membership when Blair won the 1997 election. And the actual membership may well be even lower as the official figures do not take into account recently lapsed members or those who tore their cards up in disgust at the lies about the Iraq war.

Fifty years ago the Labour Party was over a million strong. Until recently it had the wholehearted support of millions more of union-affiliates.

Peter Kenyon, the chair of the Save the Labour Party ginger group, said: “the latest figures are a crushing indictment of the latest generation of British political leaders and New Labour under Blair in particular”.
All the more reason for dumping Blair. The unedifying spectacle of a British Prime Minister crawling to George W Bush in the White House would be disgusting if it wasn’t so boringly predictable.

Blair claims to be a man of the people but dares not show his face on the streets of Britain. Blair flaunts his piety but ignores Christian leaders when they call for peace. Blair dismisses union leaders as “wreckers” when they fight for higher wages and workers’ rights but he is the chief wrecker.

Blair has lied to the people of Britain and betrayed the party he claims to lead. He’s plunged Britain into the quagmire of the war in Iraq and he’s leading the Labour Party to disaster.

Opposition to Blair and his cronies in the Cabinet is growing within the Labour Party and the trade union movement. The first step must be to remove him from the leadership of the Labour Party.

If you find these articles from the New Worker Online interesting and useful them why not subscribe to our print edition with lots more news, features, and photos?


To the New Communist Party Page